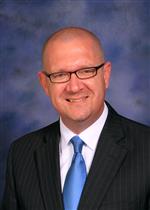 Jeremy Tucker (https://www.lps53.org/domain/75) is in his fifth year as superintendent of the Liberty Public Schools. Under his leadership, the district embarked on a facility master planning process that resulted in the passage of a $49 million, no-tax increase bond issue with 82 percent voter approval.

In 2017, Liberty Public Schools was accepted into the Digital Promise League of Innovative Schools.  Tucker was named as a recipient of the “20 to Watch” educators for 2016-2017 by the National School Boards Association. Prior to arriving in Liberty, he Tucker served as superintendent, high school principal, teacher and coach in the Logan-Rogersville School District in Rogersville, Mo.  His first position in school administration was in the Dallas County School District in Buffalo, Mo.,  where he served as a high school assistant principal.