As an extension of task force participants’ discussions of SEL-related priorities, many emphasized the need for staff members to become what William Daggett and others call “trauma-informed” and “trauma-skilled.” Trauma can range in its impact from the obvious physical signs to lasting effects on student and staff psychological well-being, coping mechanisms, and their capacity to feel safe and secure within the physical school environment. Priority focus areas related to this theme include:

AASA is deeply committed to supporting educational leaders in all aspects of their work with districts and schools. Recently, the importance of understanding the impact of trauma on students and staff has emerged as a national educational priority. In partnership with a variety of national leadership organizations—including The Wallace Foundation, the RAND Corporation, and the International Center for Leadership in Education—AASA has confirmed its profound dedication to expanding the knowledge base of educational leaders involving what has been called “trauma-sensitive instruction” and “trauma-skilled schools.” This commitment is especially evident in the work of the AASA Social and Emotional Learning (SEL) Cohort. We encourage you to share the information below with educators in your respective schools and districts, inviting them to explore this critical issue as an increasingly significant issue.

Why Has the Issue of Trauma Emerged as a National Educational Priority?

The COVID-19 crisis has accentuated the range of potential effects trauma can have on students, staff and families. These effects include the stress and psychological impact of economic devastation, unreported incidents of physical and psychological abuse, food deprivation, and the range of health issues confronting families, including the myriad losses associated with illnesses and deaths in families and communities. Task force participants consistently emphasized that many students are also being traumatized by their lack of access to the familiar and supportive structures of traditional schooling that gave them a sense of order, stability and connectivity. 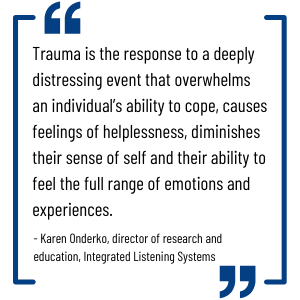 According to Karen Onderko, director of research and education for Integrated Listening Systems, “Trauma is the response to a deeply distressing event that overwhelms an individual’s ability to cope, causes feelings of helplessness, diminishes their sense of self and their ability to feel the full range of emotions and experiences.” In this age of immediate social media information access and connectivity, we see evidence of traumatic situations throughout the world on a daily basis, from weather and environmental disasters such as floods, hurricanes and fires to the epidemic of violence and mass shootings and the immigration-related displacements evident throughout the United States in recent months and years.

A World Mental Health survey conducted by the World Health Organization recently found that at least a third of the more than 125,000 people surveyed in 26 different countries had experienced some form of trauma. According to developers of this survey, the actual number is probably much higher. Generally, trauma is categorized as one or more of the following: (1) psychological abuse; (2) physical abuse; (3) domestic violence; and/or (4) complex post-traumatic stress disorder.

Considering these issues, why has trauma become a national educational priority? According to Sandy Addis, director of the National Dropout Prevention Center, and Bernadine Futrell, former director of the AASA Leadership Network:

What Should Educators Understand About the Effects of Trauma on Students?

Research suggests that trauma can cause students to demonstrate a variety of issues and problems related to their self-esteem, behavior and psychological responses, including:

Educators can approach these trauma-related effects through the lenses of student behavior and school safety. For example, the National Dropout Prevention Center and the Successful Practices Network assert that educators should assess where they are along a continuum related to how well they understand trauma and student behavior:

What Should We See in Trauma-Skilled Schools?

Trauma-skilled schools demonstrate a continual commitment to ensuring staff understanding of the impact of trauma on student behavior and overall school safety. They also ensure that specific action steps are in place to help trauma-affected students rebuild and develop resiliency, and reduce the likelihood of student aggression toward peers, educators and the school as a learning organization. What William Daggett and others call “trauma-skilled schools” demonstrate the following:

Modify School Climate and Culture to Build Student Resilience:
Trauma-skilled schools represent safe, orderly, inviting and engaging learning environments. They reflect a commitment to personalization and sensitivity to the needs and strengths of all learners. There is a sustained commitment to ensuring that students’ social and emotional development is a school-wide priority in addition to commitment to equity and excellence related to academic achievement.

Provide Ongoing Professional Development to Support Staff Understanding of Trauma, Its Impact on Student Learning and Behavior, and the Importance of Building Resilience:
Sustained professional learning supports staff in the use of trauma-related strategies that work for all students, influence the overall school culture by changing it with consistent behavior by all, and impact the mindset of all faculty, staff and students as well as all relevant policies and practices.

Trauma-skilled classrooms reflect a combination of effective teaching and learning practices and classroom management strategies. When used consistently, these practices can produce true communities of learning in which students feel safe, respected and resilient. Such classrooms should exhibit:

Relationship Building: Instructors clarify their role in relationship to students, establish themselves as safe and caring individuals, reinforce an environment of mutual respect, give students the opportunities to make choices and decisions, and establish discourse about safety and the steps they will take to help students be safe.

Clear Expectations and Norms: Trauma-sensitive classrooms have clear expectations for student and teacher behavior, a clear and sustained structure for interactions and study, spaces for students to go to if they are feeling overwhelmed, and environmental conditions that promote engagement and resilience (e.g., visual, auditory and sensory resources that accommodate students’ varying emotional and cognitive states).

Opportunities for Personalization of Content and Approaches to Learning: These classrooms reflect a commitment to differentiation, accommodating students’ varying learner profiles, interests and readiness levels. When feasible, students can make choices about content, process and product as an extension of independent and small-group investigations and project-based learning.

Integration of Trauma-Sensitive/Informed Interventions: For students who may be experiencing emotional or psychological difficulties resulting from trauma, teachers can use a variety of strategies, including: (a) modeling and coaching strategies for students to identify feelings and cope with negative reactions; (b) providing support for students to find positive ways to cope with conflicts and upsets; (c) reinforcing strategies for students to connect with friends, peers and supportive adults; and (d) supporting students in accessing support services such as counseling to address trauma-related needs.

How Can Educational Leaders Support Students and Staff in Dealing with Trauma?

The National Dropout Prevention Center and Bill Daggett’s International Center for Leadership in Education assert that trauma-skilled educational leadership requires a deep systemic commitment to building a continuum of support and intervention for trauma-affected learners. These organizations emphasize five stages that comprise a trauma-skilled educational continuum:

What Additional Services and Support Structures Should Trauma-Skilled Schools Offer?

Schools that are effective in addressing the needs of trauma-affected learners offer a variety of support services and structures, including the following:

1. Provide Information for Students and Parents About Trauma-Related Services: These schools help students identify school-based and external individuals and places that are safe and provide appropriate support interventions, including physical, emotional, psychological and family support programs.

2. Integrate Direct Instruction About Coping Strategies into Both Classroom and School-Based Services: Teachers, counselors, administrators and support staff can become a support network trained in using trauma-related strategies with students, including: (a) teaching stress management and relaxation skills; (b) modeling calming behaviors during crises (e.g., remaining calm, quiet and present); (c) practicing mindfulness and positive self-talk, serving as role models for students; and (d) focusing on relationships and connections.

3. Promote Parent and Community Outreach: Trauma-skilled schools consistently ensure that parents and community members are informed about school-based initiatives and services related to trauma support and intervention. Programs can range from information sessions conducted at both the school and community centers to more intensive forms of training such as teaching adults coping skills to decrease emotional intensity; implementing strategies for building connections; sharing ways parents and community members can support safe, orderly and inviting schools; and deepening shared understanding about community needs and resources.

4. Build Consensus About Trauma-Related Pitfalls and Ineffective Practices: All members of the learning organization should learn about and avoid frequently made mistakes when working with trauma-affected students, including making assumptions, judging the trauma, taking student behaviors personally, engaging in unfounded psychological analysis, and taking on the burden of “fixing” the trauma independently